This blog has moved, please visit: http://selfinvestnotimprove.blogspot.com
Posted by Sumner Davenport at 9:46 AM No comments:

Causes of Lack of Life Fulfillment

1. Drifting with circumstances, without definite aim or purpose
2. Meddlesome curiosity in connection with other peoples affairs; Gossip
3. Lack of self discipline, seen most often through excesses in eating, drinking and indifference towards opportunities for self advancement
4. Ill health caused by poor eating, lack of exercise, poor thinking
5. Lack of persistence
6. Desire for "something for nothing" - the unwillingness to put a real effort behind your wants
7. Lack of integrity with yourself
8. Running your life by one or more of the seven basic fears, instead of healthy actions
9. Intolerance, judgement of others
10. Closed mindedness
11. Dishonesty
12. Lack of loyalty
13. Premature Cognitive Opinions based on need to control or ego
14. Not going extra mile in service
15. Lack of contribution
16. Desire for revenge, or time spent on taking revenge
17. Resentments
18. Refusal to change
19. Lack of belief in an infinite Source
20. Lack of prayer or mediation time
21. Greed for material possessions, especially those belonging to others
22. Need to control others
23. Procrastination
24. Talking too much
25. Not taking personal responsibility.
26. Lack of Thankfulness

Simply change these into the opposite and see new positive results in your life.
Posted by Sumner Davenport at 10:15 AM No comments:

How do yo value yourself?

How often do you look to other people to tell you how good, creative, pretty or worthy you are?  Everyday countless people base their opinion of themselves on other people's judgments.

Recently Ellen DeGeneres celebrated her birthday. If you watch her show, then you are familiar with how often she encourages her viewers to participate in creative ways. Prior to her birthday, she asked her viewers to make a bust of her. Although I had never done anything like this before, it seemed like it could be fun.

I spent over 30 hours building my creation and when it was complete, I  felt proud of my accomplishment. I made her skin from the pages of her book. Well, it was photocopies of the pages, because I didn't want to tear apart a good book. Her hair, eyes, lashes, cheeks and lips were made from Halo kibble bags and canned food wrappers. Instead of stopping there, I placed her head  atop an actual functioning gravity flow cat food feeder and clothed it in a long-sleeved royal blue t-shirt complete with a hand painted ellen logo on the front. At the end of the sleeves, I created hands, again covered in pages from her book, and I fashioned her wedding ring from, the flip top of a Halo can.  This way, I wanted it to appear that she was offering a meal in her hands. Even my animal companions got involved. My dog, Tigger, "sorted" the supplies for me several times, and Merlin, the cat, tested the size of the box and even gave my completed project an affectionate sniff and rub. 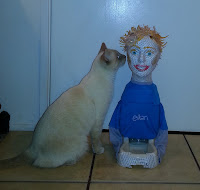 On her show, Ellen also said that if she liked what she received then she would display it on her show. Because Federal Express is good at providing tracking information  I knew my gift was received several days before her birthday show.  Unfortunately, it wasn't displayed with the collection on her show and it isn't included in the gallery on her website. Based on her comment, she must not have liked what I created and sent to her. At this point, many will say that the giving of a gift is sufficient, which it is. Regardless of how she or anyone else may view a custom gift I give, the level of love in it's creation is still very real.

Have you ever had the experience when something that you offered or created, was not accepted or received with the same enthusiasm you had hoped? We all face surprises and disappointments every day. Many spiritual leaders will tell you to expect nothing, yet we all know that deep inside we are hoping for a positive result.


"The deepest desire of every living being is to be loved."

We have all experienced disappointments and times when others didn't see what we saw in our work; however, it's when we define ourselves by those disappointments or the opinions of others that we are losing who we really are.

"You are not who other people judge you to be and your value is not based on other person's acceptance."

When someone doesn't give you the praise you had hoped for, does that make your gesture or action of less value? Does it mean that you are of less value? Absolutely not! Many people place their value on the acceptance and opinion of others. They MUST be accepted in order to feel good about themselves, or the action they took. The truth is that regardless of someone else's opinion, your value is an inside job.

Disappointment is an honest emotion. If we look at the harmony of life, we have several natural emotions.

Instead of attempting to ignore or kill off an emotion that has been given a bad label; or one that you don't enjoy the feeling, choose to embrace it instead. What can it teach you about yourself? What is it doing for you? What is this emotion doing that is working against you, or preventing you from accomplishing? 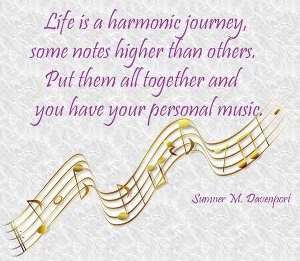 Posted by Sumner Davenport at 12:21 PM No comments:

What's your story? Is it empowering you?

"We are defined by the stories we tell ourselves. Everyone of us has a story, we are all storytellers.

How many have a limiting story in one area of your life, like you’re brilliant in one area and in another area you’re not doing so good, and you got a story. A story, a reason, an excuse. It might be legitimate by the way. Story doesn’t mean it’s not true. It just means continuing to focus on it will not empower you.

Steve Jobs, what’s his history, what’s his story? His story was he was born out of wedlock, he was given up as a child, but he was told by a neighbor girl that he was given up. He’s sitting on the grass, crying his eyes out because he knows he was given up. He was discarded. His parents saw him crying, they were good soul-full people. They didn’t have alot of resources, they had the ultimate resource - Love. They said “you were not discarded, we chose you.” That changed his life. His story became : “I’m chosen,- that’s a much better story. Now, by the way - which one is true? Whichever one you pick, is the one you’re gonna believe and the one you’re gonna live.

Biography is the furthest thing from destiny, your decisions are."

Which story are you telling yourself (and others) - Does your story empowering you to maximize what God has given you, or is your story causing you to fall short?
Posted by Sumner Davenport at 11:16 AM No comments:

Are you paying attention? 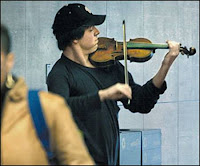 In Washington, DC, at a Metro Station, on a cold January morning in 2007, this man with a violin played six Bach pieces for about 45 minutes. During that time, approximately 2,000 people went through the station, most of them on their way to work. After about 3 minutes, a middle-aged man noticed that there was a musician playing. He slowed his pace and stopped for a few seconds, and then he hurried on to meet his schedule.
About 4 minutes later: The violinist received his first dollar. A woman threw money in the hat and, without stopping, continued to walk.
At 6 minutes: A young man leaned against the wall to listen to him, then looked at his watch and started to walk again.
At 10 minutes: A 3-year old boy stopped, but his mother tugged him along hurriedly. The kid stopped to look at the violinist again, but the mother pushed hard and the child continued to walk, turning his head the whole time. This action was repeated by several other children, but every parent - without exception - forced their children to move on quickly.
At 45 minutes: The musician played continuously. Only 6 people stopped and listened for a short while. About 20 gave money but continued to walk at their normal pace. The man collected a total of $32.
After 1 hour: He finished playing and silence took over. No one noticed and no one applauded. There was no recognition at all.
No one knew this, but the violinist was Joshua Bell, one of the greatest musicians in the world. He played one of the most intricate pieces ever written, with a violin worth $3.5 million dollars. Two days before, Joshua Bell sold-out a theater in Boston where the seats averaged $100 each to sit and listen to him play the same music.
This is a true story. Joshua Bell, playing incognito in the D.C. Metro Station, was organized by the Washington Post as part of a social experiment about perception, taste and people's priorities.
This experiment raised several questions:
*In a common-place environment, at an inconvenient hour, do we perceive beauty?
*If so, do we stop to appreciate it?
*Do we recognize talent in an unexpected context?
One possible conclusion reached from this experiment could be this:
If we do not have a moment to stop and listen to one of the best musicians in the world, playing some of the finest music ever written, with one of the most beautiful instruments ever made, how many other things are we missing as we rush through life?
Enjoy life NOW .. it has an expiration date.
Posted by Sumner Davenport at 10:05 AM No comments:

The pastor entered his donkey in a race and it won.

The pastor was so pleased with the donkey that he entered in another race and it won again.

The Bishop was so upset with this kind of publicity that he ordered the pastor not to enter the donkey in any more races.

The next day the local paper headline read:

This was too much for the Bishop, so he ordered the pastor to get rid of the donkey.

The pastor decided to give it to a nun in a nearby convent.

The local paper, hearing of the news, Posted the following headline:

NUN HAS THE BEST ASS IN TOWN.

The Bishop fainted. He informed the nun that she would have to get rid of the donkey so she sold it to a farmer for $10.

This was too much for the Bishop, so he ordered the nun to buy back the donkey and lead it to the high plains where it could run free.

NUN ANNOUNCES HER ASS IS WILD AND FREE.

Alas The Bishop was buried the next day.

MORAL OF THE STORY???

Being concerned about public opinion can bring you much grief and misery and even shorten your life.

So, be yourself and enjoy life.

Stop worrying about everyone else's ass and you'll live longer. 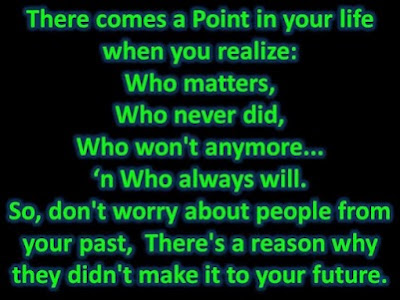 Posted by Sumner Davenport at 11:06 AM No comments: